Lionel played two games this week.  First, in the UEFA Champions League where he collected two goals and one assist in a 3-0 win over Chelsea FC in the return leg of the round of 16, allowing his club to qualify for the next round where they will face AS Roma. In addition, in Liga Santander, FC Barcelona received Athletic Bilbao this Sunday and La Pulga scored a goal in a vital 2-0 victory for his team.

Cristiano Ronaldo played one game this week, a Liga Santander match against Girona where the Portuguese international scored 4 goals and added an assist in a 6-3 win against Girona.

Here are the statistics of the two players after Week #11 of the year 2018:

Oh, that rivalry smells good. After being head-to-head in Spain, one for Real Madrid CF and the other for FC Barcelona, the two master tacticians will do battle again, in the same league, this time in the Barclays Premier League, and this could mean fireworks all over the place.

Let’s be clear, even if these two were disciples of Louis van Gaal at FC Barcelona, knew each other very well and seemed to get along just fine, they have learned not to love one another over the years. Worse, they hate probably learnt to even despise each other over time, matches, altercations, etc. And this is what will make this derby even more exciting, even crazier.

Two giant clubs that have also issues in their level of performance on the pitch. Manchester United FC, since the departure of Sir Alex Ferguson at the end of the 2012-13 season, is no longer a shadow of it former self, despite winning the FA Cup last season. Whereas Manchester City FC, constant Champions League qualifier, has not won the league since the 2013-2014 season despite several expensive transfer deals and huge transfer funds.

Throughout the season, we will have a weekly head-to-head matchup between José Mourinho and Pep Guardiola as both men will try to become not only the king of Manchester but also of Great Britain, football-wise. We shall see, as Mr. van Gaal used to say.

One thing seems set in stone: the city of Manchester will have a champion in the near future. The only thing that we are not sure of yet is which colour will reign supreme.

It is packed, to say the least. Pretty much all the big name managers will feature in the Barclays Premier League this upcoming season. Let’s take a look at the current situation:

Southampton FC – Ronald Koeman (The Netherlands) was the manager but is on the verge of signing for Everton FC, this summer.

West Ham United FC – Slaven Bilić (Croatia)
The Hammers will move into the London Olympic Stadium and with Dimitri Payet and more players, they can become an even bigger threat.

Chelsea FC – Antonio Conte (Italy)
We assume that the Blues will come back and challenge for the title and they will try to do with a new manager and he is from Italy.

The only observation is the lack of British managers currently working, especially with the top clubs. We have to go down to Stoke City FC and Mark Hughes, a Welshman, to find the first British manager in the Premier League in last season’s table (9th). A trend that is worrying for British managers.

On a more positive side, it clearly shows that the Barclays Premier League can attract the best managers in the world. On the other hand, it can handicap the local and national managers. It was a phenomenon felt with the players for about 20 years (even since the Bosman ruling and the freedom of movement for workers, mainly). For a few years now, it is at the managerial level that a shift is occurring and we will have to wait and see where this will bring British managers into. 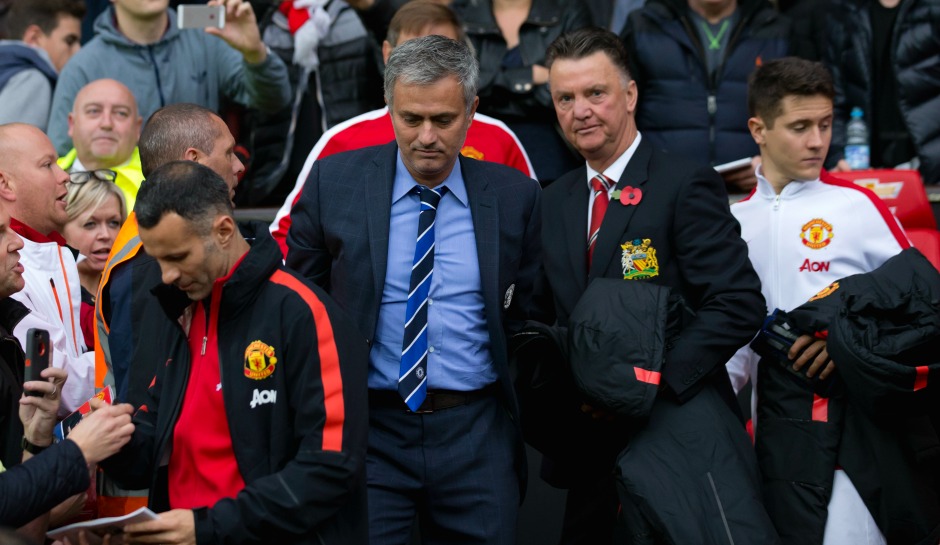 Louis van Gaal has been sacked as the manager of Manchester United FC.

David Moyes, “The Chosen One”, didn’t last one entire season with the Red Devils.

Now, the club has agreed to hire the self-proclaimed “Special One”, José Mourinho, as their new man in charge. The decorated manager, who was eyeing this position for a long time, gets his wish. What to think about this move, this career choice?

First, United fans will have to come to terms with a reality. Managers do not or very rarely stay 26 years with the same club anymore and with the success that Mr. Alex Ferguson has enjoyed, despite a difficult start to his career.

Second, he competition will be as fierce as ever before. Manchester City FC with Pep Guardiola, probably the best and most successful manager in football currently (along with “El Cholo” Diego Pablo Simeone, in my opinion). Chelsea FC with Italian manager Antonio Conte will come back and would want to regain the title as soon as possible and put the Mourinho’s era behind them. Arsenal FC have just added Swiss international, Granit Xhaka, to their lineup and would want to improve on their second place finish from last season.

And clubs such as Tottenham Hotspur FC under Mauricio Pocchetino, Liverpool FC with Jurgen Klopp, West Ham FC led by Slaven Bilic and a new stadium, the Olympic Stadium, and why not, Leicester City FC guided by Claudio Ranieri, the defending champions, will be a difficult opponent to play against, although few believe that they can actually repeat.

Manchester United FC will not feature in the UEFA Champions League this season. Instead, they will have to settle for the UEFA Europa League. It will be interesting to see how Mr. Mourinho manages his squad for this competition.

And finally, will the “Special One” finally settle in a club for more than three years and half or less? Will the native of Setúbal display more calm, cool and collected behavior as he has promised to do during his second press conference unveiling him as the Chelsea FC manager? Or will it be the same old song, played especially in London and Madrid, repeated all over again?

We shall see, as Mr. van Gaal, used to stay.

Manchester United have been looking at the past few years since the departure of Sir Alex Ferguson with disappointments. “The Chosen One”, David Moyes, was not able to bring glory to the Red Devils. His successor, Louis van Gaal, the current manager, is struggling to win over the fans and the media on his side with the club not doing as well as expected despite the amount of money spent to bring back trophies at Old Trafford. Players such as Juan Mata (M), Angel Di Maria (M/W), Daley Blind (D/M), Anthony Martial (F), Memphis Depay (W/F), Marcos Rojo (D), Luke Shaw (D), Ander Herrera (M) and a few others have been brought in the past few years, but the club has not won a single piece of silverware since an FA Community Shield triumph over Wigan by the score of 2-0 in August 2013 (at the beginning of David Moyes’s era) thanks to a brace by former star striker Robin van Persie.

Here comes José Mourinho. The Portuguese manager has been out of a job since leaving or being sacked for a second time by Chelsea F.C.. The native of Setúbal, has not found work since and there is growing speculation that he might be the favourite man to take over Louis van Gaal at Old Trafford at the end of the season. With Manchester City hiring Pep Guardiola earlier this season, the Red Devils may feel like it has to respond and despite a club legend, namely Ryan Giggs, gaining experience on a regular basis next to the Champions’ League winning Dutch coach as his assistant, the hierarchy at Manchester United might find it tempting to respond to their arch rivals by renewing a past rivalry involving both managers once at Real Madrid and FC Barcelona.

It should be an interesting story unfolding in Manchester and if the Red Devils decide to sign the Portuguese manager, it will surely set up some fireworks in months if not years to come.